May’s Happy Mail arrived! (And this time, it wasn’t folded up in my mailbox.)

END_OF_DOCUMENT_TOKEN_TO_BE_REPLACED

This month I finally found a couple things that weren’t satisfactory with this subscription, though I’ll admit one of those things is 100% not the fault of A Beautiful Mess.

The first thing that sort of annoyed me was how late my subscription arrived. The first packages start arriving around the 12th of the month — which I know because people start posting the content of this month’s subscription on Instagram. Spoilers much? My package didn’t arrive until April 22, much later than others. Normally I wouldn’t mind, but SPOILERS! I love surprises and I wish I would have been able to avoid the spoilers a bit more this month.

The second thing — totally not ABM’s fault either — was that when I finally DID receive my package, the mail carrier practically folded the envelope in half to shove it into my mailbox! When I received the February package, it was left outside my door, and both March and April ended up in my mailbox. April’s package was delivered by UPS, not USPS, and the extent of the folding was pretty severe – this month’s print and one of the cards was damaged, which was kind of disappointing.

Aside from the items that were damaged, everything else was fine, and I was pretty pleased with the quality of this month’s items.

The rest of the review is after the jump!

END_OF_DOCUMENT_TOKEN_TO_BE_REPLACED

Month 2 of my Happy Mail subscription has finally rolled around (and I’m SO EXCITED ABOUT IT).  After finding last month’s pieces more than satisfying, I was wondering whether or not March would live up to my expectations. 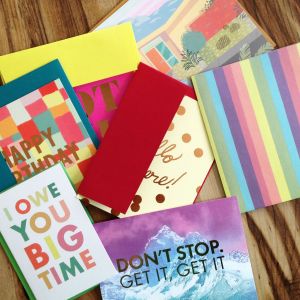 Find my review after the jump!

END_OF_DOCUMENT_TOKEN_TO_BE_REPLACED

I’ll admit I have kind of a thing for subscription services, even though I haven’t tried out too many – I used to do Goodies & Co. before it went defunct, I tried Loot Crate for about three months, and I’ve been a pretty satisfied Starbox subscriber since last July.

However, I’m also kind of notorious among my social circle for being madly in love with the postal system, and the Happy Mail subscription service from A Beautiful Mess has been tempting me since I noticed its existence last month.  And I finally broke down and subscribed.

Review after the jump!