Here’s another Starbox review.  As I mentioned before, I’ve been a regular subscriber for a while now, and with my various boxes stacking up, it’s pretty easy to see that I’m a fan of this subscription service.

This review’s a bit late, I admit, but I wanted the chance to try out each of this month’s items more than once because of what they were — which is to say a group of things I either have never used or rarely use. 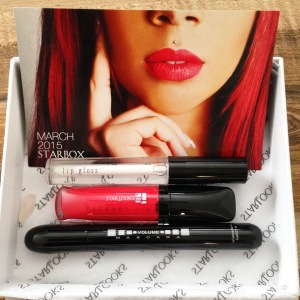 Admittedly, I did like the nice, even look of the three tubes, and the Ultra Matte Lip Slick is a perfect purse-sized item.

More details after the jump!

I’ll admit that I haven’t really thought about lip gloss since high school.  I don’t mean a glorified colored Chapstick — I mean the clear gloss I remember from WAY back, the sort that tended to be pretty messy.

That’s what I thought of when I saw the tube at the top of the photo,which is the Diamond lip gloss.  It has a wand applicator, which I’m unlikely to use unless I apply the gloss straight to my lips instead of over a lipstick.

As it turns out, the Diamond lip gloss really isn’t messy at all, and it doesn’t have a sticky texture as I was worried about.  When I applied the gloss using the included wand, it was a little slick at first, but eventually I didn’t notice it at all — always a good thing with makeup.

I tried again later, applying it over lipstick, and I liked using the Lip brush from January’s Starbox a lot more than the wand applicator, since it gave me a lot more control.  The only issue was that I more or less needed to put as much gloss on the crush as I planned to use, since the gloss doesn’t pour very well and I didn’t want to risk contaminating the tube with color.

For those curious, the Ultra Matte Lip Slick is a relatively new product from Starlooks that premiered in the March Starbox.  It’s a matte-finish liquid lipstick, which is applied with a wand.  While I do like lipstick quite a lot, liquid lipstick is new to me, and this month’s bright orange-red shade was quite on the bright end for me, especially with my winter-pale yellowy skin tone.

On first application, the texture felt really, really odd.  When I tried to apply it, I did a pretty awful job, and I ended up having to wipe it off and mostly start over.  That wasn’t the fault of the product, though, because I can’t imagine any other liquid lipstick feels different, and since I rarely use wand applicators, it took a bit to get used to again.

In terms of the actual color of the product itself, I wasn’t quite happy with how it looked.  While my skin tone is similar to that of the model in the picture — and I think it looks really great on her — I live in a northern state and have therefore spent most of the past six months hiding indoors, and I’m paler than I would really prefer.  The vivid shade is a little too much for my current complexion.  Once it’s summer and I’ve gotten a little bit of color back, this will probably look gorgeous, but for now, it’s probably going to get set aside for a couple months.

Admittedly, mascara tends not to be part of my normal makeup routine.  I have pretty long eyelashes by nature, and as my complexion is on the olive scale, the darkness of my natural eyelashes also tends to be perfectly fine for what I’m looking for in terms of defining my eyes.  I also wear glasses, and applying mascara sometimes means I end the day with black streaks on my lenses.

The mascara I’ve been using for quite some time now is a Maybelline formula — the Classic Volum’ Express — and as I’ve been satisfied with it for a few years now, I wanted to see how the Starlooks Volume Mascara stacked up.

There’s a definite bump up in quality for the Starlooks mascara.  While it doesn’t really do very much to thicken my eyelashes, it lengthened them quite a bit, and it dried quickly enough that I didn’t notice any streaky lenses hours after application.  That was a wonderful surprise, since I’ve always had that issue with mascara!

The Starlooks mascara runs at $15 while the Maybelline mascara I’ve been using (which apparently is no longer made) is in the $7-$9 range.  The quality of the Starlooks mascara, though, was significantly better.  I didn’t notice any clumping, and the smoothness and overall feel when I applied it was great.

If you’re a Starbox subscriber, what did you think of this month’s box?  If you’re interested in subscribing to Starbox, click here. (That’s a referral code.)