Typically, I’m not the biggest shounen series reader.  I didn’t really enjoy Bleach when I tried it, and neither Naruto nor Death Note have really ever been my speed.  I’ve enjoyed Inuyasha, sure, and just about everything else by Rumiko Takahashi — but usually shounen’s not my bag. 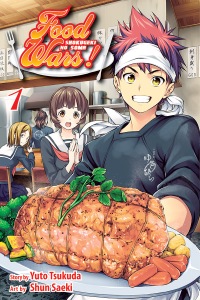 Food Wars! Shokugeki no Soma is a series that defies my normal categorization.  Though ostensibly centered on Soma, the titular character, this series — set in a hyper-competitive Japanese cooking academy — contains a rounded-out cast, interesting (though weird) subplots, and so much cooking knowledge and so many recipes that you can practically teach yourself to cook just by reading it.

I’ve read the first four volumes of the series — purchased all four of them, actually — and I’ve been so vocal about how much I like it that my local indie automatically orders the next volume for me after I’ve purchased the most recent one.

One of the things I truly enjoy about long-running manga with ensemble casts is that normally I enjoy the other characters much more than the protagonist.  Food Wars!  is no different: my favorite characters are Erina Nakiri, an arrogant high school first-year with a prodigious sense of taste, and Nikumi, another first-year with a special talent for selecting and working with meat.  Each of the characters are interesting on their own, and seeing the different ways each character deals with individual challenges is incredibly entertaining.

The art style of Food Wars! is, admittedly, a little bit weird.  Whenever Soma wins a shokugeki, or a cooking challenge, the shokugeki judge is usually depicted as… uh… naked.  And covered in food.  Which you can take as you will.

It’s definitely the sort of manga that’s a bit on the fluffy side, and some of the plots are a little hyperbolic — any time there’s a shokugeki involved, it gets really hyperbolic.  But it’s definitely a shounen-style manga, and shounen readers will probably really enjoy the storytelling style, the weirdly battle-like illustrations when anyone’s cooking something, and of course the vaguely pervy humor.

This one is 100% a read, not a drop.  I would recommend this manga to manga readers who also like to watch cooking shows.  (Master Chef and The Taste both come to mind.)  It’s definitely a manga I’d recommend buying at least a couple volumes of to really get a sense of the story, since the first volume’s plot arc stands almost completely alone, and it would be a great series to pick up soon: the anime will premiere in April.