This year, I’ll be Tweeting and playing along with @NaNoWordSprints as we go along! 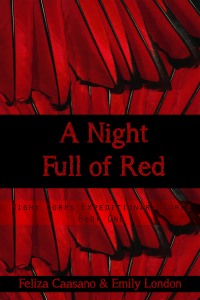 After being expelled for “fighting” (read: defending a girl from a bully) at her last school, Dani Brunswick isn’t thrilled to be shuttled off to an all-girls Catholic boarding school miles away. She’s less thrilled when Cara, a resident “pretty girl” (and closet otaku) takes a dedicated interest in her. And even less thrilled when she and Cara get chased down the street by a ten-story giant iguana.

It’s not her day. Or her year, really.

To their surprise, they’re saved by what can only be described as a “magical girl” who looks like she came straight out of an anime: bright violet hair, a fluffy skirt, and a pair of shiny magical swords. What’s more, she looks suspiciously like the school’s student council president… who totally hates Dani, actually.

Really not her day. Or year.

Soon, Dani and Cara are recruited by a mysterious organization, the Night Corps, which fights the grotesque monsters and their commanders, a group known as the Night Coven. After gaining a new power to help fight the monsters, Dani and Cara join with a veteran to form a three-person team – coming face to face with a terrifyingly angry Lily. She prevents the two from engaging in combat until, caught unaware, Dani and Cara are caught in the crossfire of a Night Coven attack.